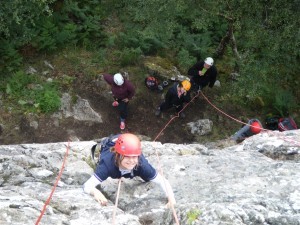 I finally remembered the camera this afternoon for a bit of climbing at clown crag. This afternoon’s session was passed over from Paul (gofurtherscotland) who is off enjoying himself on holiday in Germany. The girls, Jess, Sophie & Charlotte, all managed to run up all the routes with only the occasional stop to ponder a move. 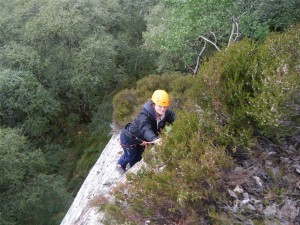 Sally fought her way to the top with a determined look on her face, turning to joy and satisfaction as she reached the ground. Andrew got his excuses in early with his sore knee, but he still did well on a route and then did a great job belaying everyone else up the routes. 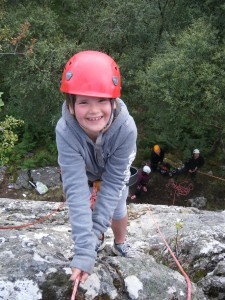 After everyone had climbed a  few routes I set up an abseil so that the girls could climb to the top and then abseil down, controlling their rate of descent. Jess seemed far happier controlling her own rate of descent – when she had been lowered from the climbs it was always either too fast or too slow!

Everyone picked up the new skills quickly, letting me sit back and watch – great! 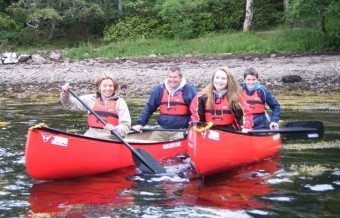 A last minute canoe session was organised this afternoon from Poolewe for the Kidd family. Mum and Dad (Laura and Frank) teamed up in one boat and the teenagers (Rosie and Finlay) in another. The competition between the boats was good natured and only turned nasty when Finlay tried splashing the other boat. 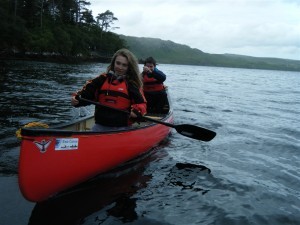 We fine-tuned the paddling stokes in the lee of Inverewe Gardens before heading out into the wind. Both teams fought hard against the wind and finally we made it along the coast. After a coffee we had a relaxing paddle back, travelling with the wind (although it had dropped considerably – typical!). Just enough time to see how balanced Rosie and Finlay were, ending with Finlay nearly falling in. 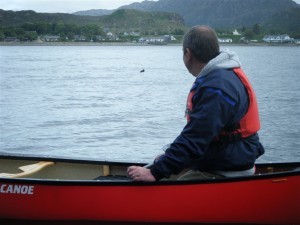 On the final journey back to shore one of the local seals popped up to see what we were doing, he watched us from the distance for the rest of the paddle. Laura thought she saw a jumping fish at one point, however it was later seen again and identified as an otter, who was swimming around the seaweed looking for lunch.

Another climbing excursion – maybe Ewe Climb would be a better name for me! The Newman family where pointed in my direction from Jim (nineonesix) since he unfortunately broke his collar bone recently. Hope you recover soon! 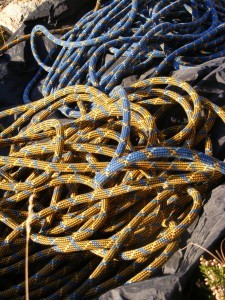 The Newman’s arrived with part enthusiasm and part teenager lethargy which soon disappeared (the lethargy bit, that is). There was competition to be first, James got the spot and easily nipped up the route, followed by Guy, then India, leaving Paul to be last.

The four paired up and belayed each other on the rest of the climbs, learning to belay and to trust each other. All four picked up the skills quickly and competently. The afternoon was finished off with a climb to the top and an abseil to the foot of the crag, a good end to a great session.

Despite grazing her leg, Letty managed to conquer each climb, getting all the way up every one. A great achievement for a 6 year old (even if it was just days till her 7th birthday – Happy Birthday!)

Louise trumped Letty’s graze with a bigger knock to her leg, but still went on to get to the top of the routes. Rob chose to take the hard lines up each route, remembering the climbing he did in his past.

The next afternoon was due to be wet so they chose to have a trip to Gairloch’s indoor climbing wall. Erin and Letty both found their feet quickly, enjoying zipping up and down the wall. Louise and Rob left happy and confidant with their skills to take the girls climbing again. 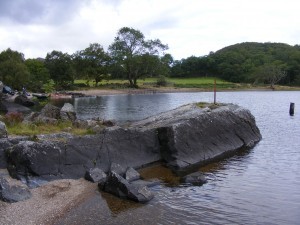 Graeme wanted to practice kayak rescues for when he’s out and about sea kayaking. Whilst the Fisher family from the morning session where taking a dip in their swimming costumes, Graeme donned his wetsuit, I looked at the water and chose to go for the drysuit option – I think I’m getting a bit soft, or is it just getting a bit wise? 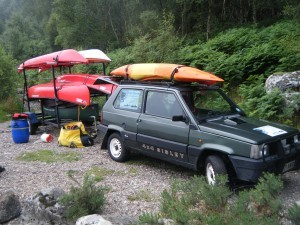 The afternoon was spent mainly splashing around in the water, attempting to get back into boats. Graeme found that after a bow rescue it’s good to keep holding on otherwise you topple all the way round and end up swimming!

The sun shone down making it an enjoyable way to spend the afternoon, still glad that I wore my drysuit though!

I confess to jumping out of my canoe (with the plan of checking I could still climb back in happily) to see my canoe racing off faster than I could swim after it. I should perhaps have stopped the boat after gunnel bobbing it along before jumping out! 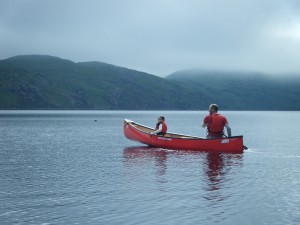 The Fisher family came to Tollaidh Bay on a misty morning, after setting off onto the water the sun decided to burn through and make it a fantastic day. 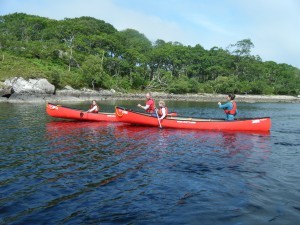 A nice introduction to canoeing. Letty and Erin did really well, getting to grips with all the strokes. The thought of hot chocolate on the beach spured them on along the river and back into the loch. Battling against the breeze back to the start was the hardest part of the trip. 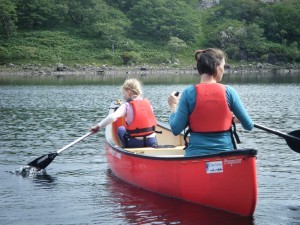 Louise then had a play around in a sea kayak, finding it’s long sleek hull and lower profile made it far easier to control in the breeze. 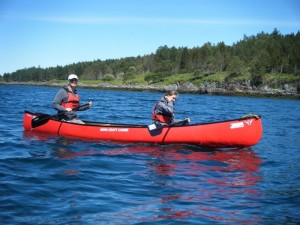 This morning was spent pleasantly paddling around near Poolewe. 3 generations of the  Lawrie family picked up canoeing skills quickly, helped by a competitive game – Loch Ewe Pyranhas. We fought the breeze and paddled along Inverewe Garden’s shore line to reach Camas Glas, where we sneaked onto the beach for a cuppa and cake.

We cruised along with the breeze back towards Poolewe, chasing each others boats trying to capture each others ‘tails’. Each boat team had improved too much and I found it hard to win. The weather has continued to be fantastic up here – blue skys and sunshine, none of these grey dreich days down south are getting! 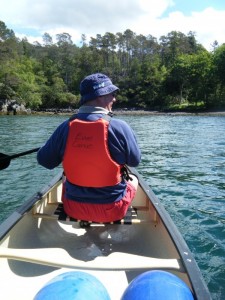 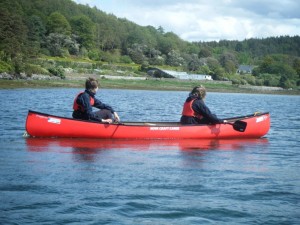 Nipped out for a quick paddle this evening on Loch Tollaidh. The whole loch was perfectly still, disturbed only by the ripples radiating from the paddles. Fantastic weather that we’re having at the moment, hope it continues!

Such a nice day it was perfect to get out for a canoe. Improving stokes was the on the cards for today, paddling on your offside may feel hard but it helps improvement! The paddle was finished off with a spot of gunwale bobbing and re-entering capsized boats! 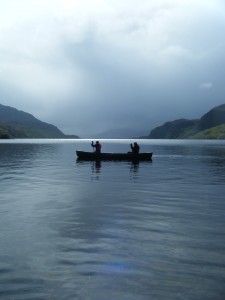 Despite the poor recent weather we had sunshine, and a wee bit of hail, for a quick paddle around in canoes. The morning was spent with James and Craig becoming competent in manoeuvring their boat through obstacles and against the wind. Well done, hope you enjoyed it. 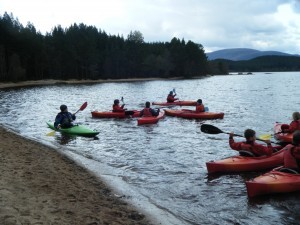 1ST Wester Ross Air Scouts took to the water again to have fun kayaking on their water skills weekend. The snow and wind didn’t deter them all from having a great time and improving their skills. Even Scout leaders apprehensions where put to the side as they realised that kayaking is fun simple and safe for adults too! 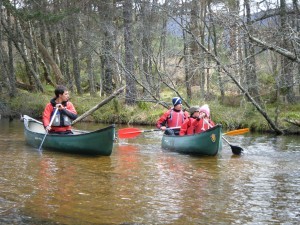 1st Wester Ross Cub Pack on their ‘summer’ paddling trip… It may be May but nobody had told the weather. All the adventurous cubs kept paddling and having fun even though the snow was falling all around. Everyone got to grips with the paddles and showed their skill at catching the ‘piranhas’.

A lazy mornings paddle in Tollaidh Bay with folk trying out canoes and kayaks. Michelle and James found that kayaks can be less stable than canoes; hope you’ve dried out now! Meanwhile Jade zipped around with ease. 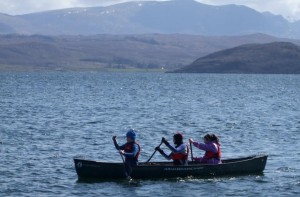 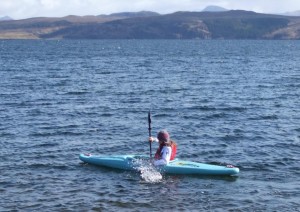 Over the weekend 1st Wester Ross Scouts were camping on the shores of Loch Ewe, so it a was perfect opportunity for them to have a splash around in our canoes and kayaks. Although we experienced all the seasons in one day, they all had a good time and hopefully it has inspired them get out paddling again soon. 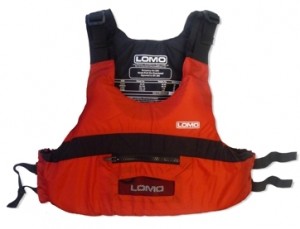 Box loads of new equipment has recently arrived. Lots of shiny buoyancy aids are being unpacked ready for use. 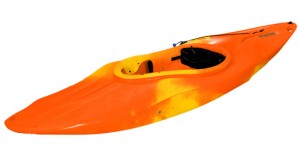 Out on Loch Ewe today