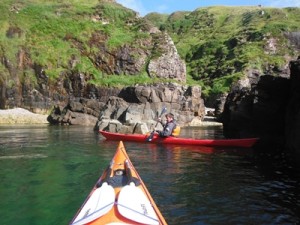 Today I collected Carl from Sands Campsite, leaving his family behind, and headed north for a paddle from Melvaig. I’d had the whole family out paddling a few days earlier, but this was time for Carl to have a bit of time ‘off’. We set off to explore the coastline just north of Melvaig – it’s a great area with lots of little inlets, arches, caves, waterfalls and beaches.

We didn’t go far, we just spent our time enjoying the ruggedness and exploring as many nook and cranny as we could. It was a great way to spend the afternoon. Upon returning to Melvaig it would have been hard not to have stopped in for a pint at the Melvaig Inn – a great little place to go with the great coastline. 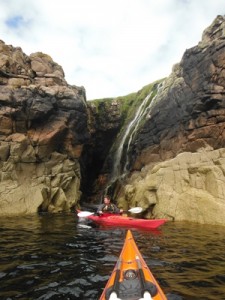