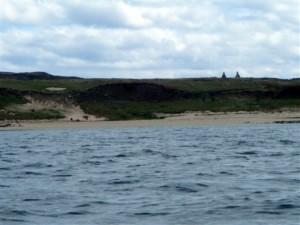 I’ve been meaning to paddle around to Laide for some time now, forecast looked good, so today was to be the day. I had planned an earlyish paddle because the wind was due to pick up later on in the day, however with it being a Sunday it was hard to be up and out early – so it was 11.20 by the time I was paddling away from my local slipway.

The sun shone down as I floated along the familiar shores of Mellon Charles, with the wind behind me it was easy going. It wasn’t long before I entered Slaggan bay, whilst the sandy beach is great, it’s somewhere I’ve been many times before and so not worth stopping off at today – onwards. 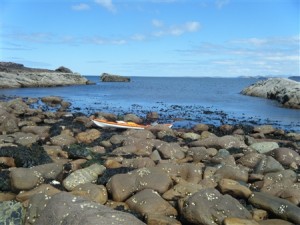 The coastline from here up to Greenstone point has some fantastic climbing spots, I’ve spent many hours sat in the sun around these cliffs and I must get back out here soon with my climbing shoes. With a bit more paddling I was rounding the tip of Rubha Mor, Greenstone Point. The coastline becomes a bit more aggressive from here – makes for interesting scenery.

Eventually I was feeling like I’d been sat for too long so I hopped out for a sandwich next to Opinan Slabs, yet another great little crag full of fun routes. After stretching the legs it was time to head on towards Laide. Up till now I’d only seen the normal bird life in the area – cormorants, shags, oystercatchers, guillemots and of course gulls. I don’t see puffins too often so it was good to see a few out on the water, just a shame they were camera shy! 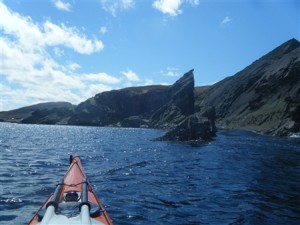 This area’s full of climbing, it wasn’t long till I got to Udrigle Fin – a little sea stack with a few routes to the top. Anyway, enough of the climbing stuff – this should be about the paddling…

I soon came towards the other Mellon – Mellon Udrigle. The beautiful sandy beach had just a handful of folk on it – come to think of it, there have been no other boats, no climbers and just a few folk wandering around the headland, fantastic place to be on a bank holiday weekend! Mellon Udrigle is the home of Miles and Clarissa’s holiday cabin, a fantastic place to stay with stunning views. 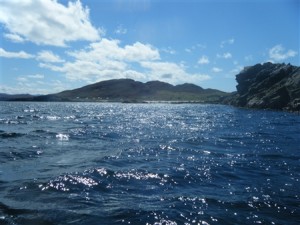 The rest of the journey was into the wind, luckily the coastline isn’t too interesting so I could put my head down and get on with the paddling. Upon arriving in Laide I chose to land in front of the campsite, then it was just a short portage to the road where I left the kayak to hitch home. After only about 1 km of walking (and only 3 cars going my way) Clarissa and young Hannah and Tom, from that beautiful beach cabin, gave me a lift home even though it was completely out of their way – thank you!

Just the simple job of picking up the boat and I could relax after an enjoyable little paddle. One thing that I have learnt from today’s trip is that I don’t have enough padding in the seat – off to make some cake to sort that.